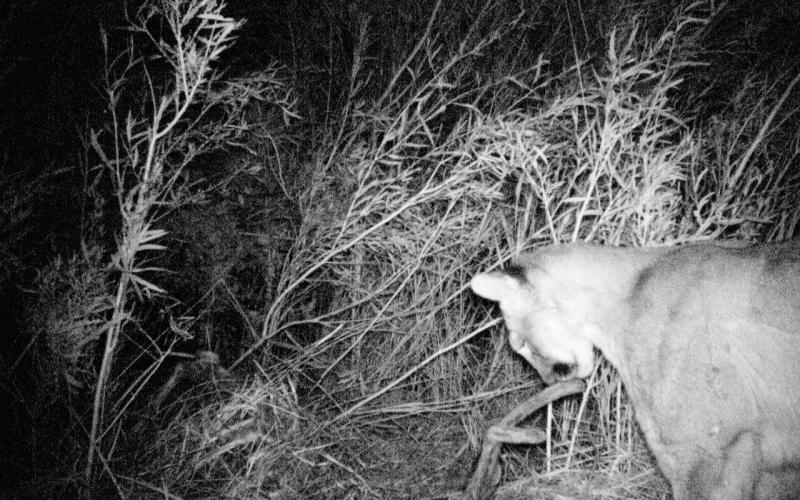 Bryan Hamilton, the Park’s Acting Integrated Resource Management Program Manager, describes the critical role that mountain lions play in the Park’s ecosystem. Hamilton also discusses the challenges of predator management in rural areas and the Park’s approach to this question.

However, predator management is a polarizing issue. Despite the positive effects of predators on ecosystems, mountain lions can be viewed unfavorably, particularly in rural areas.

National Parks find themselves in the middle of this controversy. The mission of Great Basin National Park is to protect its resources and ecosystem processes “unimpaired for future generations”. Apex predators are valued as an integral component of the faunal community but most national parks are not large enough to protect intact predator populations. Large-bodied obligate carnivores like mountain lions must leave the sanctuary of parks, where conflicts between lions may arise. Cooperative conservation is the only effective management strategy for large animals, like mountain lions, which must be managed at landscape scales, across administrative boundaries (Elbroch, 2020).

Cooperative conservation recognizes that wildlife management is a human endeavor. Without community support, dialogue, and engagement, conservation falls flat and difficult problems become more difficult. Despite this reality, most agencies and conservation biologists fail to acknowledge the importance of social differences and human behavior in managing predators.

To improve mountain lion management, Great Basin National Park has applied for Southern Nevada Land Management Act funding to implement the cooperative conservation model. This project will use mountain lion research and management as tools for outreach and community engagement. Mountain lions will be captured and fitted with satellite linked GPS collars. When the GPS locations become tightly clustered, this often means the lion is feeding on prey. After the lion leaves the kill, citizen scientists and school groups will investigate those kills and collect information about patterns of mountain lion predation. The project will also hold regular meetings in Baker and Ely, connect students from urban areas with landowners and livestock producers around the park, and provide training in wildlife techniques. Using these data, scientists can determine the home ranges, abundance, diet, and habitat use of mountain lions. Ultimately this project will improve predator management, ecosystem health, and human well-being through mountain lion research and community engagement.