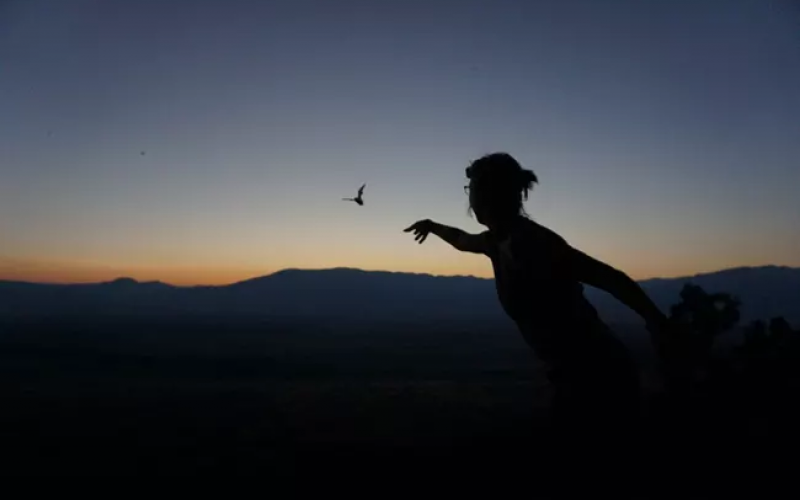 Photo: An individual releases a bat at sunset. Joey Danielson

Bryan Hamilton, the Park’s Integrated Resource Management Program Manager, summarizes his recently published paper on the threat of wind power to bats. Hamilton and his collaborators studied a roost of Mexican free-tailed bats in eastern Nevada which is located 6 km from a large wind energy facility.

Joey Danielson, Kelsey Ekholm, and I recently had a paper published in the peer reviewed journal Population Ecology on Mexican free-tailed bats. These bats are one of the most abundant mammals on earth. They consume vast quantities of insects and provide $23 billion dollars annually in economic benefits to agriculture in the United States. A single colony in Texas was valued at over $3,000,000 in annual pest insect suppression services. But like many common species, Mexican free-tailed bats are often ignored by conservationists and biologists. A major emerging threat to Mexican free tailed bats is wind energy development.

Mitigating wind energy mortality requires data on biology of the affected populations. But often these data are not available, especially for common species like Mexican free-tailed bats. To address this, we collected data on Mexican free-tailed bats at a large roost in eastern Nevada. Two million bats use this roost. Did I mention the roost is 6 km from a 152-MW industrial wind energy facility?

Roost use by reproductive females and juvenile bats demonstrates this site is a maternity roost, with significant ecological and conservation value. To our knowledge, no other industrial scale wind energy facilities exist in such proximity to a heavily used bat roost in North America.

Given the susceptibility of Mexican free-tailed bats to wind turbine mortality and the proximity of this roost to a wind energy facility, we need to continue work at this site. We need more information on bat mortality and the effects of mitigation. Pattern energy has been an excellent partner and works hard to protect bats at their facility. I hope we can publish the results of this work soon.

Surprisingly, we have almost no information on migration patterns of Mexican free-tailed bats in the southwest and California in particular. We hope to use the MOTUS network to understand these migration patterns. This information would allow much more precise siting of wind energy facilities and help with local mortality mitigation.