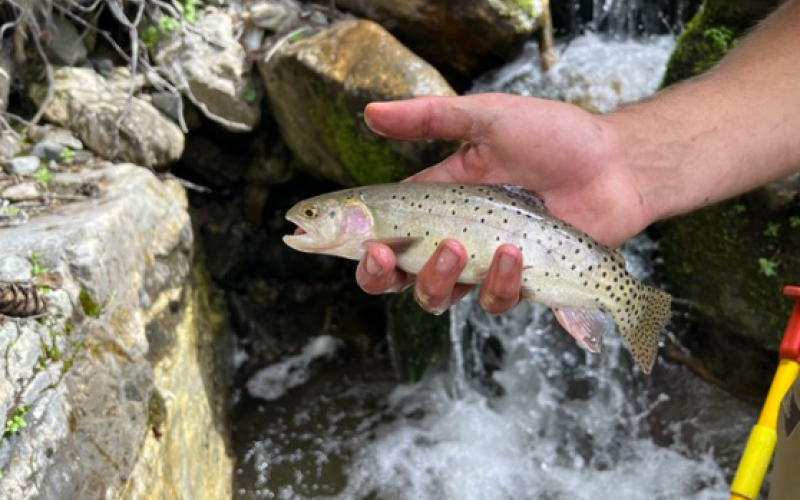 This article is the third in a series of posts showcasing articles published in the Winter 2022 issue of “The Midden”, Great Basin National Park’s semiannual resource management newsletter. This is the second installment of this series, which introduces readers to some of the issues, projects, and management strategies currently occurring in Great Basin National Park. Our series does not feature every article published in “The Midden”, so the best way to stay fully up to date is to check out this winter’s issue!

In this article, Joseph Danielson, a Biological Science Technician, describes ongoing work between the Park and Brigham Young University to understand genetic variation among Bonneville Cutthroat Trout in Nevada.

The BCT is a subspecies of cutthroat trout that lived throughout the Bonneville Basin, which included Lake Bonneville (now the Great Salt Lake) and its tributaries, at the end of the last ice age. Once thought to be extinct, genetically pure populations have been found in recent decades in Utah, Idaho, Wyoming, and Nevada. The BCT is the only species of trout native to GRBA and east central Nevada. Careful management has allowed the BCT to remain off the endangered species list, but human encroachment, the introduction of non-native trout, an increase in fire severity, and worsening drought still threatens the species, particularly at the periphery of its range.

The information gained through genetic analysis will be used to determine the source population(s) for the Baker Lake BCT introduction and for other future reintroductions and management actions. Current BCT populations in the region are isolated and rather small in numbers, particularly with the recent drought years, which can negatively affect the genetic diversity of these populations through inbreeding depression and genetic drift. Identifying these genetically diminished populations, and whether certain streams could benefit from inter-population translocations will help us maintain healthy populations of fish.

To aid in the preservation of this species, the Great Basin National Park fisheries crew is working to restore habitat and protect BCT in local streams. However, threats to, and recent loss of several populations due to fire has prompted additional proactive measures such as the high elevation lake refugia project in which we are moving BCT into Baker and Johnson Lakes to increase the number of populations in Nevada. For a successful fish move, we need to identify populations which have enough fish and genetic diversity to be used as a source population, so we have been collecting genetic samples from BCT throughout their range in Nevada. We do this by clipping a small portion of the caudal fin of at least 30 fish per stream. So far, we have sampled approximately 500 fish from 15 out of the 16 streams in Nevada currently occupied by the species.

BYU’s analysis will shed light on how much genetic variation there is in fish within and among Nevada’s BCT streams and show if there has been any introgression with non-native trout species. Although historically BCT were the only trout species native to east central Nevada, the haphazard introduction of other trout species following white European settlement has led to BCT being either outcompeted and/or hybridized in many areas. Locally, the Rainbow Trout is of particular concern as it can successfully spawn with BCT to produce fertile hybrid offspring and has done so in GRBA streams in the past.

Nevada’s populations of BCT were reestablished using few local source populations and we expect that the genetic analysis will reflect these different lineages. While these populations at the time were not considered to be bottlenecked, the size of the populations suggest that genetic diversity could be an issue in the future. Once the genetic analysis is complete, the Park will have information needed to proceed with introducing BCT into Baker Lake in 2023 as well as make decisions on how to optimally manage all the isolated BCT populations in Nevada.