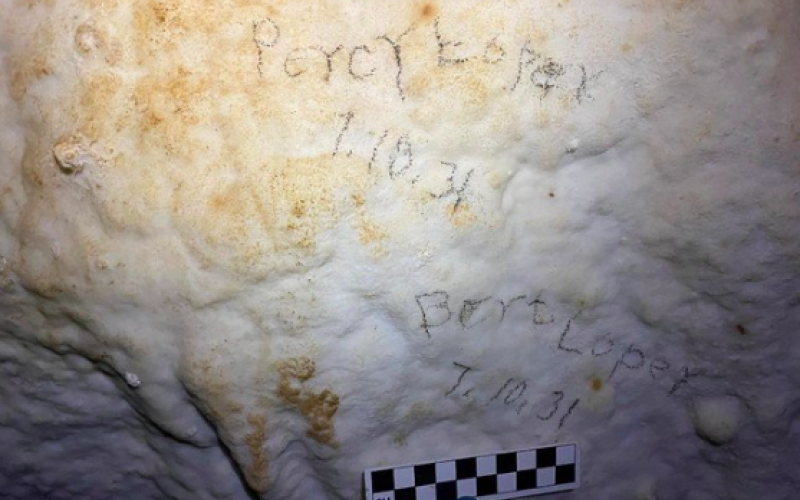 This article is the second in a series of posts showcasing articles published in the Winter 2022 issue of “The Midden”, Great Basin National Park’s semiannual resource management newsletter. This is the second installment of this series, which introduces readers to some of the issues, projects, and management strategies currently occurring in Great Basin National Park. Our series does not feature every article published in “The Midden”, so the best way to stay fully up to date is to check out this winter’s issue!

In this article, Brianna Patterson, an archaeologist with the Great Basin Institute, pieces together the stories told by inscriptions in Snake Creek Cave.

For thousands of years, humans have entered caves and made their mark. From rock writing to historic inscriptions, these cultural resources capture a moment of the composer’s life. Such is the case for the more than 200 historic inscriptions within Snake Creek Cave in Great Basin National Park. Archaeologists see these entries as more than just names and dates. They use the information left behind to piece together past lives. It’s the stories archaeologists tell that are at the heart of our work.

A small crew composed of volunteers and one archaeologist recently started uncovering the history of Snake Creek Cave’s former explorers. Within three hours, the crew had recorded 104 inscriptions, which cover a span of time from 1885 to 1978. These inscriptions include several fascinating entries such as “Kenneth B. Vanda H. 1932 Sweethearts”, “Francis April 21, 1935 3rd Grade”, and a potential cattle brand symbol made using carbide.

Though there is still much work left, the crew’s efforts have already made a connection to a man named Bert Loper. Through genealogical research, the crew discovered Bert was born in 1913 in Burbank, Utah a little over twenty miles from the site. In 1930, he first entered the cave at seventeen-years-old and returned the next year with his thirteen-year-old brother, Percy Loper. In 1935, Bert moved to Las Vegas, Nevada to work as a steel cleaner and painter at the Hoover Dam. Sadly, Bert died on November 17th after roughly three months on the job. He was electrocuted while working on the rails of a crane in the power house and fell sixty feet.

The Loper family didn’t return to Snake Creek Cave until ten years after Bert’s death. Fifteen-year-old Lavern Loper explored the cave in 1945, and seventeen-year-old Guy Loper ventured there in 1946. Both boys left their inscriptions just as their older brothers had. In 1951, Percy Loper returned to the cave twenty years after his first visit with Bert. It’s possible the cave and Bert’s inscriptions served as a memorial for his siblings, a place where they could remember and feel connected to their brother.

From just a few names and dates, the crew has started to piece together one family’s bond to Snake Creek Cave. The Lopers' inscriptions and other links to the past must be preserved by leaving these cultural resources as they are. This is true for the cave as well. Caves form over millions of years, and both historic and modern inscriptions permanently ruin this important natural resource. While we can’t undo the damage from historic inscriptions, we can prevent further harm to the cave by leaving it as it is.

We hope the research conducted in Snake Creek Cave will continue to reveal hidden stories about the cave’s visitors. This work is associated with a partnership between the Great Basin Institute, Great Basin National Park, and Humboldt-Toiyabe National Forest and is funded by the Southern Nevada Public Lands Management Act. The goal is to study wild caves within White Pine County to better understand and manage them. Thank you to the volunteers who followed a stranger into a dark hole to help record historic inscriptions. And extra thanks to the volunteer who immediately started researching and found the mysterious Bert Loper.