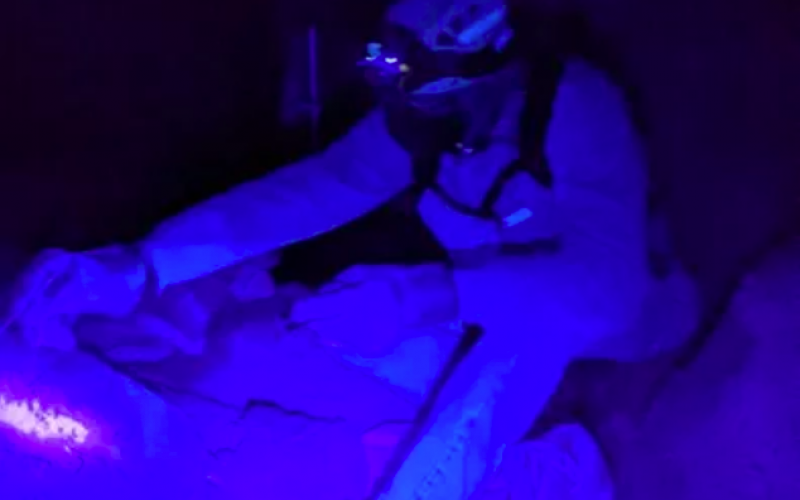 Who likes spring cleaning? Fifteen volunteers came from Baker, Ely, Reno, Salt Lake City and the Wasatch Front, Bend, Oregon and southern California to spend two days helping restore Lehman Caves during the annual lint camp on March 2 & 3, 2022. About half of the attendees were returning lint camp pickers, while the remaining half were new. In addition, about half were cavers from grottos, while the other half were general public.

Lint Picking We started off lint picking in the Lodge Room area using only blacklights as our light sources. These make the cave look really different, plus the lint pops out in bright colors making it more visible to remove. Later we moved into the Grand Palace, where the amount of lint was indeed grand.

Cave Restoration In the afternoon of the first day, we had some folks ready to tackle rediscovering the natural cave floor. We worked in areas near the Queen’s Bathtub and the Inscription Room, digging out old sand and dirt that had been brought into the cave for the original trail. Popcorn floors, rimstone dams, and more can now be seen.

Trail Cleaning We just couldn’t ignore the numerous large lint balls in the exit tunnel any longer. Using a broom and vacuum, the area was cleaned up in less than two hours filling a gallon Ziploc bag with lint. We had a couple volunteers bring a portable power washer, and they worked with some others on the slope going down into the Grand Palace, marked with a slippery sign. With a tarp, scrub brushes and sponges, the crew was able to remove quite a bit of caked on mud, gum and other man-made debris with 5 gallons of water, which was all retrieved and carried out of the cave. This should make the trail safer for both visitors and staff.

Algae Spraying Algae grows near many of the cave lights, sometimes so abundantly it looks like a mini-forest. We had less algae than normal due to the lights being turned off in the cave for over a year while the cave was closed for COVID. The crew found algae at only 10 lights from the Entrance to the Lodge Room. About half the lights in the Grand Palace had some algae near them. As we got closer to the Exit Tunnel, where the lights are left on longer, we found more algae. We sprayed the algae with a 10% bleach solution, which isn’t so good for cave life, so the more we can reduce algae by other means (such as keeping lights off as much as possible), the better.

Carbide Removal In the 1890s, the carbide lamp was invented, and miners soon were using it through the Great Basin. The lamp can be mounted on a helmet. The bottom portion holds carbide powder. Water is added, a spark lights the output, a chemical reaction occurs which creates a flame illuminating the area ahead. Eventually the carbide powder is burned out and needs to be replaced with fresh carbide. There are several areas in Lehman Caves with carbide dumps, or places where this spent carbide was disposed. We focused on two of those sites, the Sunken Gardens and Talus Room. Experimenting with a variety of techniques from brushes to tweezers to vacuum, we removed about half of a 5-gallon bucket of spent carbide from the cave. The fine white carbide powder is toxic to cave biota.

Final Thoughts As a thank you to attendees, we showed the National Geographic movie The Rescue about the 2018 Thai Cave rescue and also did a tour through the Talus Room and West Room. Many attendees say they don’t need a thank you, just knowing that they are helping make the cave a better place is thanks enough. We are so lucky to have such dedicated volunteers! We suspect that we’ll be able to continue to fill lint camps quickly, especially if we adopt what one participant suggested as the new lint camp motto, “You missed a spot.”