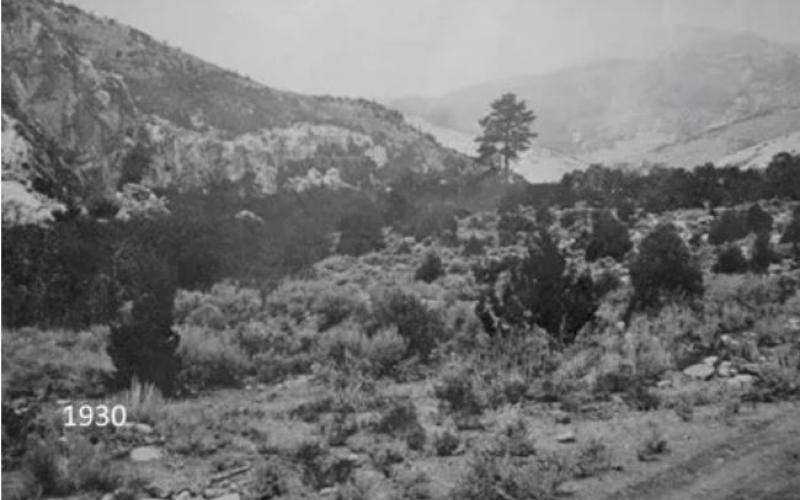 Image of Grey Cliffs from 1930. Note the extensive sagebrush, with pinon pine and juniper trees moving in. NPS.

This article is part of a series of posts showcasing articles published in the Winter 2022 issue of “The Midden”, Great Basin National Park’s semiannual resource management newsletter. This is the third installment of this series, which introduces readers to some of the issues, projects, and management strategies currently occurring in Great Basin National Park. Our series does not feature every article published in “The Midden”, so the best way to stay fully up to date is to check out this winter’s issue!

Wait!! What? This wasn’t always a forest?

It is easy to see national parks as static and unchanging. But the world is always moving, and slower, gradual changes often go unnoticed. Over time these changes may become accepted as the status quo, the way things have always been. This phenomenon is called shifting baseline syndrome (Soga and Gaston, 2018).

Shifting baseline describes a gradual change in our accepted norms and expectations for the environment across generations. Our tolerance for environmental degradation increases and our expectations for the natural world are lowered. For example, bison are absent from 98% of their historic range. Yet the functional extinction of bison is often viewed as a conservation success story. Five billion passenger pigeons once darkened skies in eastern North America. It’s impossible for anyone living today to grasp the spectacle and ecological impact of those now extinct flocks. While these examples may seem cliché, distant and even overly dramatic, they show how shifting baselines affect our perception and acceptance of the state of the natural world. In truth similar changes are occurring all around us.

One example is in the vast sagebrush ocean of the Great Basin.

More than any other species, sagebrush defines the Great Basin, forming one of the largest intact habitats in the country. Many animals, like sage grouse and pygmy rabbits, are only found in sagebrush. Sagebrush is also important for recreation and agriculture, carpeting beautiful open spaces with lush springtime wildflowers, vast vistas, and deeply dark night skies. But sagebrush is also one of the most threatened ecosystems in North America.

Fire in the Great Basin is as natural as wind, sun, and rain. Ecosystems here evolved under frequent and low severity fires (Chambers, 2008). Sometimes called “good” fires, many were ignited by lightning, others intentionally started by Native Americans, who used fire as a tool to manage their environment. But colonization virtually eliminated fire as a natural process from the Great Basin, when aggressive fire exclusion began in the 1920’s. This policy had a slow but dramatic effect on sagebrush plant communities.

Without fire, conifers like pinon pine and juniper outcompete and overtake sagebrush. Singleleaf pinon pine and Utah juniper seeds are carried into sagebrush habitat by birds or small mammals, where they establish under a “nurse plant.” Nurse plants provide a cool, moist microclimate, with fertile soil for young trees. Over time these trees “overtop” their sagebrush host, out competing it for critical resources of light and water. Fires historically reset this process every 25-100 years (Knick et al., 2005). In the era of fire exclusion, pinyon juniper woodlands have increased ten fold (Miller and Tausch, 2001), fragmenting the sagebrush ocean into lakes, ponds, and puddles (Welch, 2005).

How can we be so certain a site wasn’t always a pinon juniper forest? Or that the site hasn’t reached its natural, stable, climax community like forests in the eastern US? The evidence of this fire driven process is all around us, starting with the very ground we stand on.

Soil formation is not only a geologic process, but a direct reflection of the plants that formed the soils over thousands of years. Based on soil composition, we know that in some forested areas, trees that are present today were not a significant contributor to the creation of those soils. Instead, soil was formed by sagebrush and grasses, not the acidic needles of a conifer forest.

Dendrochronology provides more strong evidence. Pinon and juniper trees can live extraordinarily long lives. The oldest recorded Utah juniper lived nearly 2,000 years; the oldest single needle pinon pine 900 years (Weisberg and Ko, 2012). If the increase in trees is due to fire exclusion, we would expect relatively young trees in former sagebrush habitat. Indeed, almost all trees are less than 100 years old, aligning well with the beginning of colonization and the fire exclusion era. Ancient pinons and junipers are often found in pockets within or adjacent to sagebrush habitat, but these stands are scattered and limited to rocky slopes with thin soils, areas protected from fires. Old growth trees on these sites show regular fire scars, further documentation of the frequency of low intensity fires of the past.

Over time, we have forgotten about “good fire” and the historic, open sagebrush landscapes it maintained. We’ve come to view widespread pinyon juniper forests as a permanent part of our environment. But these young forests have major effects on plants and animals. Wildlife, like sage grouse, pygmy rabbits, and yellow-bellied marmots need open sagebrush habitat to survive. Other species like mule deer and migratory birds have declined due to conifer encroachment. Less water is available in streams and springs and there is less native grass and more barren soil. The land is less productive and less diverse.

Fire seemed like the obvious solution to restore sagebrush. But fire itself now presents a challenge. In pinyon juniper forests, dense flammable fuels create catastrophic fires that are hard to control and can damage soils. Following these fires, cheatgrass, an invasive annual, can take over. Cheatgrass is now found on over 17 million acres in the Great Basin and has a negative effect on biodiversity and ecosystem services. Rather than using fire, chainsaws or masticators are used to remove conifers. Sagebrush and other native species, like bluebunch wheatgrass or penstemon, are often seeded on restoration sites after conifer removal. Our success in restoring sagebrush varies but is often better in places with deeper soils, native plants in the understory, and higher precipitation. In addition to restoring sagebrush, conifer removal treatments are designed to recover quickly after wildfires and to resist invasion by cheatgrass. Maintaining sagebrush may require regular maintenance to remove young conifers before they can establish. Restoration projects are carefully monitored to ensure project goals are met.

The sagebrush ocean is the Great Basin. But this vast, beautiful landscape is threatened. Fire exclusion and conifer encroachment have slowly changed sagebrush habitats, leaving these areas vulnerable to catastrophic wildfires and invasion by cheatgrass. As our baselines shift, we may come to see pinyon juniper forests as a fixture, rather than seeing the sagebrush habitat that the conifers have replaced. But active restoration through conifer removal can restore the sagebrush ocean and the wildlife that depend on it.